Status: Shall be upgraded ...

One of the most important points of a finance software is the proper handling of a different currencies. To enable openpetra to do the valid calculations the columns of the database table “a_currency” shall be enhanced. Therefore let us have a look onto the actual table referred in http://openpetraorg.sourceforge.net/dbdoc/ and the topic main. 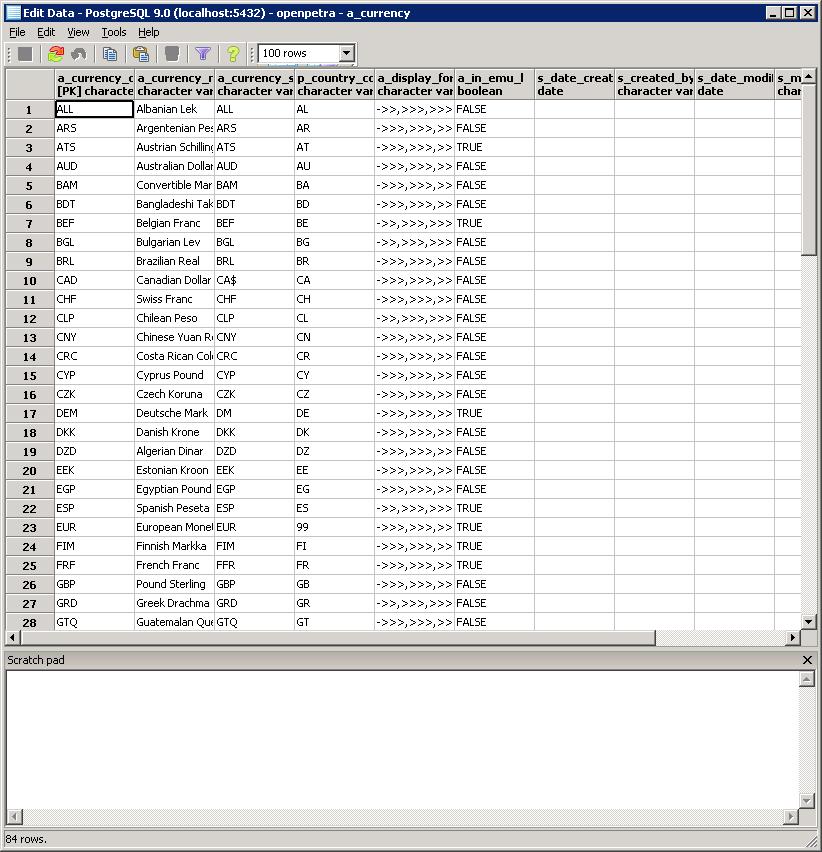 This table manages the handling of the different money units in different countries.

Remarks to the actual database table

More than 99% of all Transactions in an OM-office are B-transactions. Each Month the offices send its money to the different fields in the foreign countries and here a normal bank transaction is used. The source-office sends their money from a B-ledger, the bank changes this into the currency of the target-office and at this place it will be a B-Transaction too. No T-ledgers is involved in this process. So the T-ledgers are something like a millstone round the neck of this offices.

Requirement: For all this transactions only the data type decimal is allowed.

Each national office has to manage its own book keeping process based on its own base currency or primary currency. Furthermore they can handle some assets defined in other currencies. In the very first step this is petty cash and this is the only form of foreign currencies which shall be managed by openpetra.

Requirement: Only one of the following transactions are allowed

In the finance market two different exchange rates are defined. In our example his is the rate for the exchange of the € to $ (exch€$) and this is the vice versa exchange rate to € (exch$€).

Not to be used:

Requirement: A currency exchange rate has to be defined for each currency say exchPrimCurToSecCur

In the next step there exist a smallest currency value. In case of the euro and the dollar it is 1 cent, in case of CHF it is 0.05 cent.

Requirement: Any of this calculation shall be rounded to a multiple number of the smallest currency value after a division.

A german example may be the prices for fuel and one Liter may cost 1.329 Euro. The smallest currency value is 0.01 Euro and if you by 15 Liters, you have to pay 19.935 Euro which may be rounded to 19.94 Euro. This rounding is done before any other calculation.

If you want to refuel two cars in two refueling processes you have to round two times, only if you refuel the cars in one step, the refuelling is done one time

Requirement: Only rounded numbers are allowed to be added up.

Requirement: Ledgers which represents a cash value only can handle multiple whole number amount of the smallest currency value.

Requirement: Each Currency shall handle it's own currency multiplier.

There is no value like "Not a Number" for a .net decimal value. The best choice in errors which will produce results useless for accounting is.

Requirement: In case of a critical error the result shall be Decimal.MaxValue.

Let someone exchange some money of primary currency into money of secondary currency. Independently if he uses cash or a bank account, he gets a transaction report holding the data for

The exchange fee shall be accounted against a ledger like administration costs or else.

But in normal cases there is a difference between the internal value of exchPrimCurToSecCur and the value used in the transaction report. So the result will be an exchange rate profit or an exchange rate loss.

Accounting of expenses and incomes

In the first case the amount can be accounted directly.

In the second case the amount can shall be converted into primary currency by using the value of the actual exchange rate and rounding to a whole number multiple of the smallest currency value.

Requirement: Expenses and incomes shall be accounted by using the actual exchange rate rounded to a whole number multiple of the smallest currency value.

There are following different types of accounting processes.

In all this cases the following process is required.

Actually there is no process required in Step 1. We allways can assume, that the balance sheet is in balance before an accounting process is done.

This means that there are different types to present a currency value.

Base Currency Unit is the Swiss Franc and in normal cases you are speaking about 1 CHF (Sometimes 1 SFr. or shortly 1 Fr. is used. Allthough CHF is requrired by the ISO 4217 windows culture only knows SFr, but in order of keeping up an international understandability we require following:

Requirement: For the presentation of the Swiss currency CHF shall be used in the complete program.

For all payments in Switzerland the amount is rounded in 0.05 CHF, because the smallest coin is 5 Rp (0.05 CHF).

Requirement: If Petra calculates the value of an invoice it may be necessary to round up to 0.05 CHF.

In case of the financial accounting the amount from the voucher is used.

Payments from other countries are debit/credit on the banc-account in 0.01 and at the end of the year/quarter/month the bank debit the costs in 0.0x, so that the solde is 0.05.

This process is driven completely by the bank account statements. There is no need for an additionaly rounding of some values.

(*) By updating the format strings the regional settings of windows shall be refered.

It is important to define good test cases. So let us have a look to an example.

In any cases the cost center value remains unchanged.