How to work with bazaar through the GUI on Windows

We use Bazaar as Source Code Management (SCM) for OpenPetra. Bazaar is a SCM that is classed as a 'Distributed SCM', which differs considerably from centralised SCM's like CVS. General information about Bazaar can be found here: [1].

Alternative: use Bazaar from the command line

If the GUI is not your prefered way of doing things, please see How to work with bazaar on the command line

You find the downloads for Bazaar for Windows here: http://wiki.bazaar.canonical.com/WindowsDownloads

We use the Standalone 2.4.2 Stable Release for OpenPetra development. Do not download a newer release as a Bug on Launchpad's servers prevents us from using newer releases!

The download includes the core Bazaar distribution and several GUI's for Bazaar. We recommend to not install TortoiseBzr initially if this is your first experience with Bazaar - it adds more ways to work with Bazaar, which is good, but it might confuse people who are new to Bazaar.

We have noticed that the German translation is not complete at all, and on German Windows systems the GUI is quite mixed up with several languages. Solution: delete all but the en locale directory from C:\Program Files\Bazaar\locale. If the local-folder is not available on your computer you can also set the LANG environment variable to the required language code.

If you still get plink console windows with bazaar, have a look those instructions! 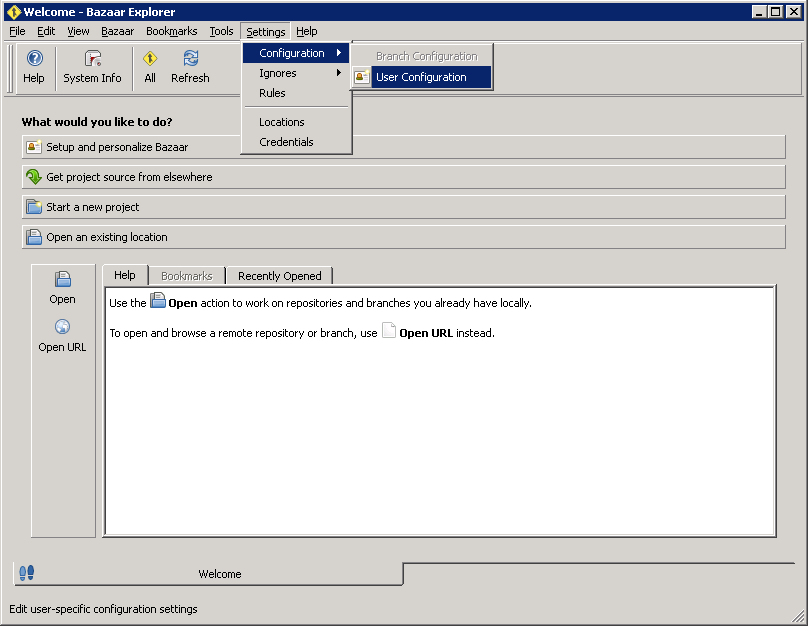 Set up the bug tracker integration as follows: 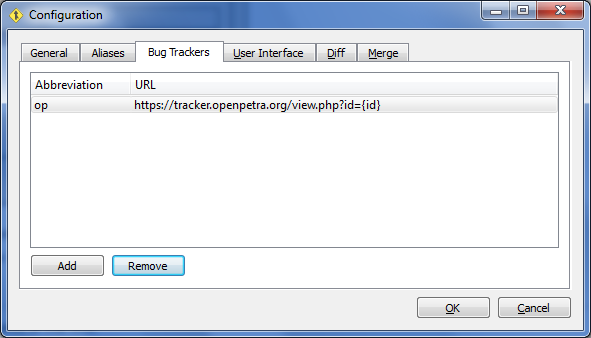 Here is the URL for easy copy&paste: https://tracker.openpetra.org/view.php?id={id}

The commit dialogue of Bazaar Explorer allows one to specify a bug that was closed with the commit. One needs to prefix the bug number with 'op:' (e.g. 'op:170' if Bug #170 is closed in the openPETRA bug tracker).

If you prefer to use WinMerge for showing the diff of files, you can configure it in the same window as well: 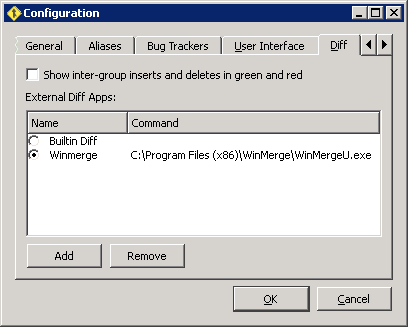 To setup KDiff3 (http://kdiff3.sourceforge.net/) as your Merge tool, configure it in the same window: 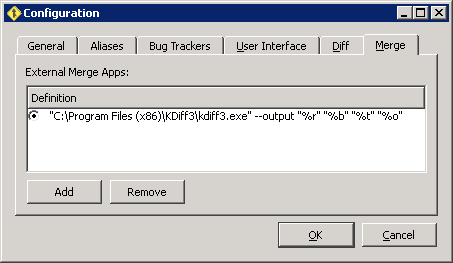 To avoid problems with the line endings, and the code generators, in Bazaar Explorer go to Settings/Rules and insert the content listed at below:

Working with trunk and Branches in Bazaar

'trunk' is the main branch of the repository.

We have an agreed procedure in place to create a Branch for each bug or feature from Mantis that takes more than 3 hours to develop, including the time needed for coding and testing. Only small bugs and not so complicated fixes can be committed directly into trunk.

Once the work on a Branch has finished a member of the core development team that can merge changes from a Branch to trunk needs to be contacted to get that Branch merged into trunk. (Work is not considered finished until a merge from trunk and an Uncrustify operation has been carried out as the final steps in your work - your branch will not be accepted for merging into trunk if this hasn't happened!)

Bazaar offers several formats in which the local Bazaar repository can be built. With a 'Shared Repository' (setup described in section Create a local repository) one can check out several branches (and trunk which is just a special branch) into separate Working Trees.

Create your own branch

Every developer needs to create a free account at http://launchpad.net, for hosting their own Branches there.

For creating a new branch, you need to follow the following steps...

You only need to do this once!

Here is one list of possible connection errors: http://the.earth.li/~sgtatham/putty/0.58/htmldoc/Chapter10.html 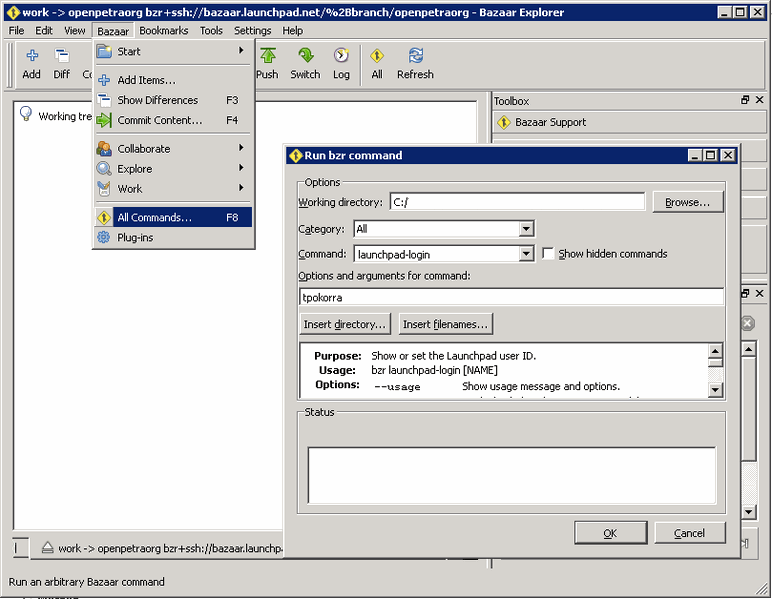 You only need to do this once!

Now you should configure a directory where you will store all your branches. Go to "Start a new project", and click on "Initialize". Make sure to select the options "Shared repository" and to tick the option "Create parent directories of location, if required". The option "Branches in the repository will default to not having a working tree" should not be ticked.

In the example screenshot below I have chosen the directory <My Documents>/openpetra/bzr/. However, 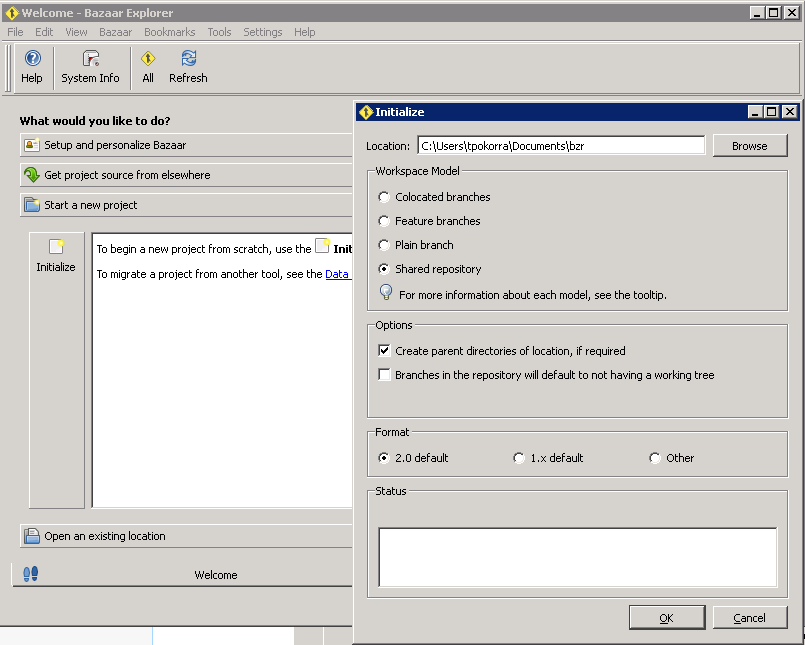 You might be asked, if you want to create a new "hat". Just say yes. An explanation can be found here: http://wiki.bazaar.canonical.com/BzrExplorer#hats

Create a new branch on Launchpad

Make sure you have started pageant with your private key, otherwise your connection to the bazaar server will fail. To do that, you just need to double-click on the .ppk file, which is the private key file which you saved when you created the SSH key for developer access. 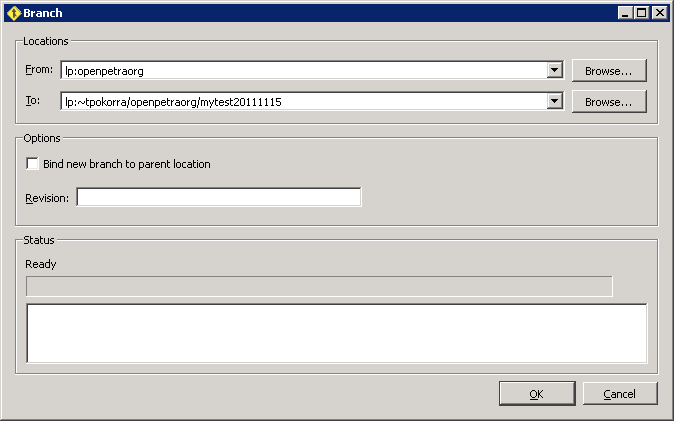 The source will be: lp:openpetraorg

The destination should be an URL in this form: lp:~LAUNCHPADUSERID/openpetraorg/BRANCH_NAME

Note: You could also create branches that are unrelated to the OpenPetraOrg project: eg. lp:~tpokorra/+junk/BRANCHNAME.

Checkout the code into a working tree

After creating the branch on Launchpad you need to download this branch into a separate directory in your own local repository. This can be done by selecting in the menu Bazaar | Start | Checkout. 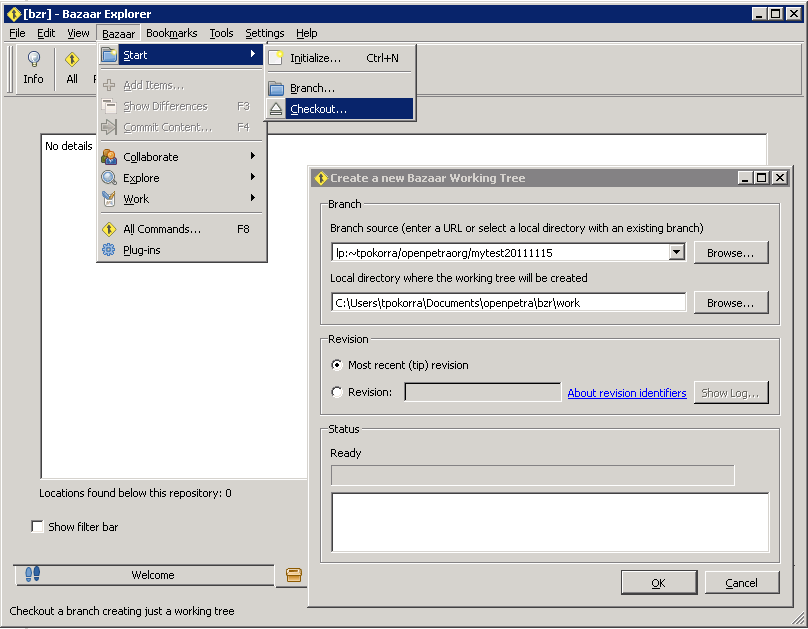 Use the URL of your branch:

The destination for the checked out trunk as shown in the screenshot above is:

However, you need to make sure that the destination folder is inside your local repository directory which you have created earlier (in step Create a new branch on Launchpad)!

After the checkout has finished, click on Refresh in the Bazaar Explorer, and then double-click trunk to get to the view of the current working tree: 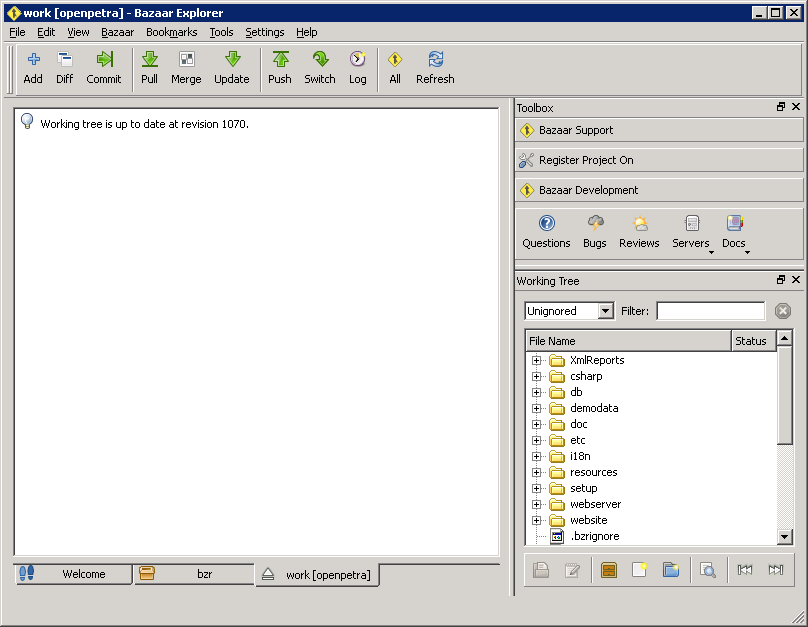 Now you can edit the code and add functionality. Please make sure (if you have one) and create the Database with nant. (without those steps the server won't start) (see also Setup_of_Development_environment#initial_steps)

--Pokorra 07:31, 16 March 2012 (UTC) Do NOT add your OpenPetra.build.config file to your public branch at Launchpad, since it may contain your database password etc. Also it will cause problems with merging your branch into trunk. If you have a private branch, ie. it is on your own bazaar server, and it only contains adjusting changes for a production system, then you can call your config file OpenPetra.build.config.my and add it to that private branch.

The Bazaar Explorer should look similar to this for your working tree: 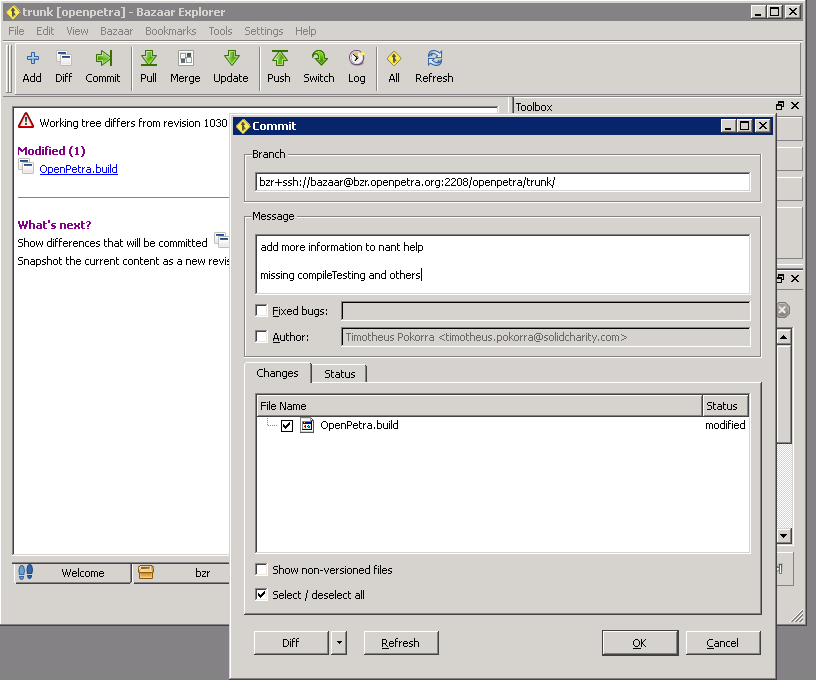 Alternatively, you can work with Tortoise Bazaar as well: 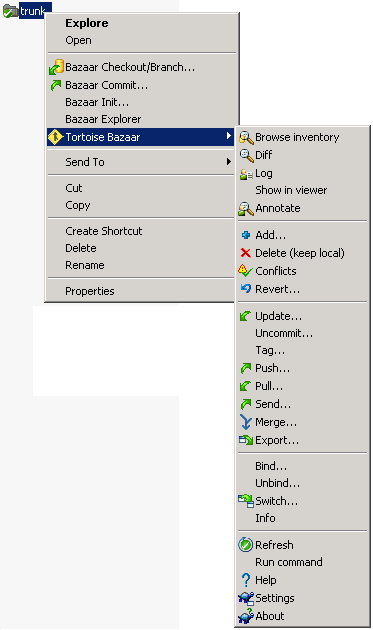 Rebase a branch / Merge from trunk

You should rebase your branch regularly, so that the changes happening in trunk are flowing back into your branch.

You need to click on Merge, and if there have been changes merged into your branch, you will need to Commit as well.

It is highly recommended to first commit all your own local changes, before doing a merge.

If you want your changes to be merged into the OpenPetra trunk, use the link Propose for merging on your Launchpad code page. It is recommended to have small branches for each feature that you want to go upstream. You will not be able to reuse a branch, after it has been merged into openpetra trunk, since we want to avoid criss cross merges etc.

Certain members of the core team with write permissions on trunk will switch to trunk, and then do a Merge from the branch. They will resolve conflicts if there are any, and do a Commit.

This example will show you how to resolve a conflict.

The situation: the file Gift.Importing.cs has been edited both in trunk and in the dev branch. We switch to the dev branch, and select Merge from bzr+ssh://bazaar@bzr.openpetra.org:2208/openpetra/trunk/

This is how it looks in Bazaar Explorer: 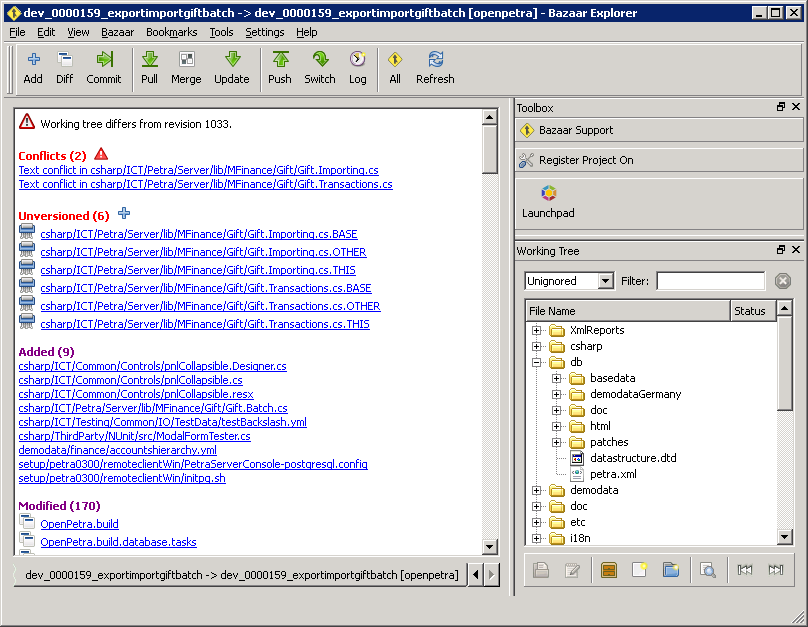 Now go in the menu to Bazaar > Work > Resolve Conflicts. You will get this screen:

If you have configured KDiff3 right, you should be able to double-click the conflict files and see them in KDiff3. This only works for files that have text conflicts. For files with content conflicts, you need to manually compare the .BASE and .THIS or .OTHER file with the current file.

In KDiff3, you have 3 columns:

Make sure that the line end style is set to DOS (and not to UNIX).

You might also want to right click the conflicting file in the Explorer, and select the Log, this will you to see what happened to the file, and how the changes got into that file, by looking at the diff of each commit.

After you have fixed the bottom file, saved it and closed KDiff3, select "Mark as resolved" in the conflicts list window, when right-clicking the conflict file.

Please go to Notes_about_Bazaar#Frequently_asked_questions to see our FAQ for bazaar.