This is a small concept paper which helps to understand some rules for the code “to be generated” in order to make the Nunit tests something easier to write and to read. Actually in openpetra a set of yaml-files describe the content and the layout of the used dialogs. This yaml-files are used to create a set of c#-files (auto generated code).

A yaml file which is responsible for a dialog named Example.yaml generates the files Example.cs, Example.Designer.cs and Example.ManualCode.cs and each of the file holds a part of the complete class TFrmExample.

The content of Example.Designer.cs is very unique and contains the basic definition of the controls, its initialization and integration into the form. Example.cs is generated by one of a set of different templates and contains a data binding code to the server and its database. The Example.ManualCode.cs file is the only file which shall be used for manual and problem specific code.

The program openpetra itself shall be tested by NUnit-forms and according to the idea in defined in Comments to Revision 1089 the follwing rules are outlined.

To understand the situation we have to notice that an Assert must not necessarily placed inside of the [Test]-code itself and can also be done in the routines below. In order to demonstrate this, I’ve placed an Asssert.AreEqual(true,false) inside of a constructor and an Assere.AreEqual(true,true) inside a test itself. Both tests are running well and in case of an failed test you will get shown the correct error comment. 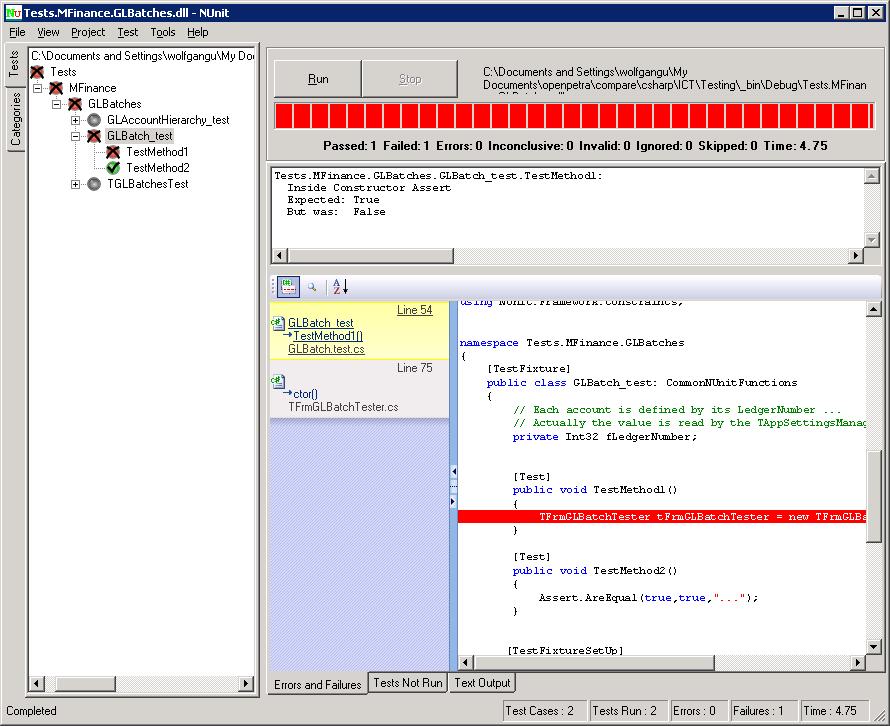 So we have to do the following.

So we have following types of tests:

For example if there exists a tab control and the tester will click onto a button on a tab which is not been shown, then this is a improper use of a control and this shall result in a failed test. An other example may be a click onto a button which is disabled or invisible. In both cases the click event shall be overridden and inside of the click the message shall be shown.