The Shepherds Framework will be a support in creating individual instances of 'Shepherds' for openPETRA. 'Shepherds' are Installer-like Dialogs with Next-Back-Finish buttons. They have several steps/pages and through that offer a 'guided walk' to the openPETRA user on what key data to enter (or review) for a specific purpose.

Example Screenshots of an existing PETRA (not openPETRA) Shepherd can be found here.

Outline of the Solution

To Be Continued in Class...

Approval of Functionality and Program Code

Follow-on: Thoughts on Implementing the Server Side of the Shepherds

See Thoughts on Implementing the Server Side of the Shepherds

ChristianK brought the 'Shepherd Framework' in line with trunk, cleaned it up and made it to mostly conform to our OpenPetra Coding Standard and Guidelines. He also fixed two Unit Tests that were broken when the students left that branch.

The framework consists of several Classes, an Interface and a generic GUI in which UserControls with functionality can be hosted at run time: 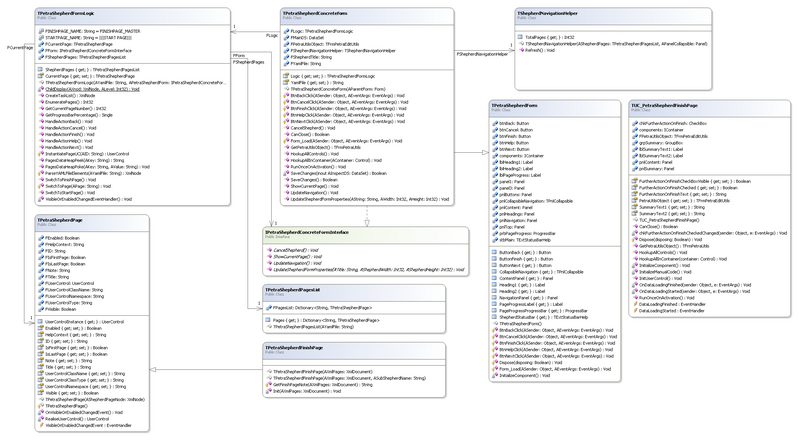 The implementation for two very basic Shepherds got started to prove that the Shepherd Framework can underlie and drive OpenPetra Shepherds as we are planning to have them. Simply uncomment the lines that contain 'AddNewFamilyShepherd' and 'AddNewChurchShepherd' to launch the two Shepherds from the OpenPetra Main Menu.

The client-side implementation is far from complete and the handling of data, let alone saving or loading of data has not been implemented yet. Nothing was done yet for the server-side aspects of Shepherds.

Basic Documentation as written by the students: